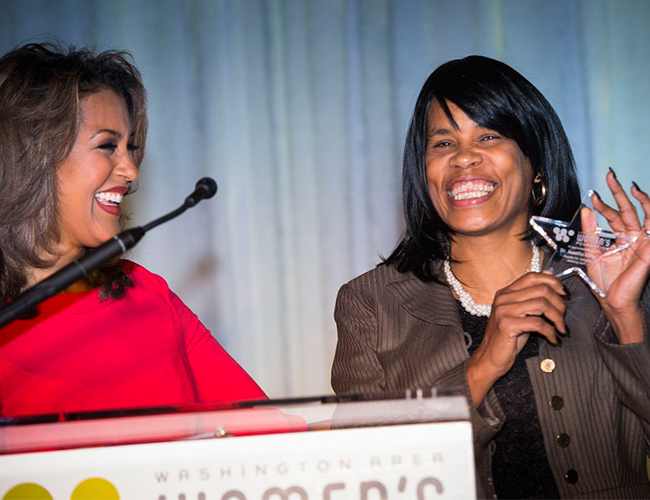 If you type in the words “where are they now” into Google you’re presented with a host of possibilities. Child stars, 90’s celebrities, and even the cast of The Office. It is a fun exercise and will often provide an “oh wow” moment or two.

Here at Goodwill of Greater Washington we have “oh wow” moments like this on a regular basis. Why? Because we see lives transformed. We see the progress our students and associates make on a daily, weekly, and annual basis. We thought you might enjoy reading an update on one of our graduates, which is sure to give you warm fuzzies as we enter the month of thanksgiving and reflection.

Juanita King began her journey with Goodwill in 2014 as a graduate of our Hospitality Jobs Training Program along with our partnership with the Marriott Marquis. You can read about her beginnings in this article we posted last year.

Soon after being hired at the Marriott Marquis in 2014 now Mayor Muriel Bowser, during her campaign, job shadowed Juanita King in housekeeping to get a first hand account of being a part of a union. But since this article was published Juanita continues to work at the Marriott Marquis and has moved up to guest services, is 8 years clean from crack cocaine, and is no longer HIV detectable – amazing!

But things have gotten even more amazing for Juanita. On October 19 of this year she shared her story with over 1,000 guests at the Washington Area Women’s Foundation 2016 Leadership Luncheon. Juanita was introduced by Lesli Foster of WUSA9 who said Juanita personified persistence.

“How many of us have investigated ourselves?” Juanita asked the crowd assembled in a ballroom at the Marriott Marquis. “I have and I’ve found that I’m an overcomer. I have gained a victory over my past.”

Juanita stood on the stage to help support the work of the Washington Area Women’s Foundation, which has provided financial support to Goodwill of Greater Washington since 2005. Grants from the foundation have helped Goodwill launch hundreds of women on the pathway to economic self-sufficiency. She then received a mention with the foundation in Essence Magazine.

During Juanita’s time at Goodwill she earned the nickname “Doctor King” when she introduced herself that way in class. The name stuck and Juanita sees it as a symbol of possibility, “I could be a doctor if I wanted to.”

It was with great delight Juanita received a special award presented to her by Lesli Foster on behalf of the Washington Area Women’s Foundation. It was engraved, “In appreciation to Dr. Juanita King – thanks for being a shining star.”

Help Support Goodwill’s Job Training Programs
Your support will positively impact others like Juanita.Make a Gift

We also invite you to spread the word about this resolute woman and her extraordinary story. Use the share buttons below!

This article was written by: Steve Allen
SMThree.com
← Veterans Day: Their Willing Sacrifice
7 Scariest Commutes in the World →