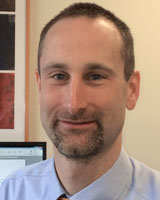 Before joining Goodwill of Greater Washington, he worked as a litigation associate and then partner at Varnum, LLP, where he focused on contract disputes, commercial collections and real estate disputes.

A native of West Michigan, Josh earned his B.A. in Philosophy from Calvin College in Grand Rapids, Michigan and his law degree from the University of Michigan School of Law.

Josh is admitted to practice law in Washington D.C., Maryland, Virginia and Michigan.

Josh and his wife Amy live in Silver Spring, Maryland, and have four sons.