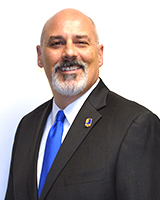 He has been with the agency since January 2004 and formerly served as Director of Commercial Business Development, VP of HR and Executive Vice President.

Michael is a 2009 graduate of the Goodwill Executive Development Program through Goodwill Industries International. This program is designed to develop the next generation of Goodwill leaders and prepare candidates to lead Goodwill affiliates as CEO. He is also a member of the Leadership Greater Washington class of 2014.

Michael came to Goodwill with 20 years of experience in management. His previous career was in the radio industry where he managed programming and sales teams at some of the country’s top stations.