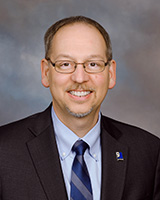 Previously, Jeff spent five years at Capital One, where he was a three-time winner of the prestigious Circle of Excellence award. Jeff was the Business Information Officer for their $15 billion internet banking business, and played a critical role in several large-scale IT infrastructure initiatives. Prior to that, he spent six years in the telecommunications industry with MCI and Cable & Wireless, and eleven years in banking with First Virginia Banks, Inc.

Jeff has served on the Board of Directors of two local non-profit organizations: The Ashley Fister Cole Foundation and The Hugh Gregory Gallagher Motivational Theatre. He is also on the Finance Committee of his church and is a member of Toastmasters International, an organization that promotes the development of communications and leadership skills.