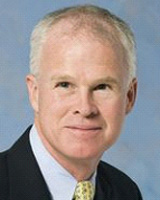 Retired from Marriott International in 2018, Edward Ryan served as the executive vice president and general counsel in 2006, and was a senior executive officer of the company.

Mr. Ryan joined Marriott in 1996 and, prior to being appointed general counsel, held several positions in the Marriott law department, including development, asset management, operations, franchising, and corporate transactions. Prior to joining Marriott, Mr. Ryan engaged in private practice in Washington, D.C., first with the firm of Crowell & Moring from 1978 to 1984, and then with Hogan & Hartson (now Hogan Lovells) from 1984 to 1996, where he was made partner in 1989.